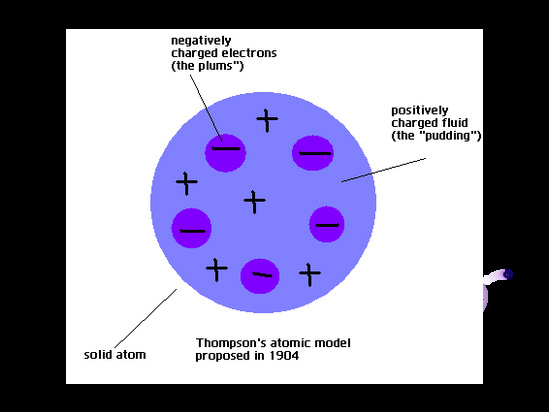 In 1897, J. J. Thomson dramatically changed the modern view of the atom with his discovery of the electron. Thomson's work suggested that the atom was not an "indivisible" particle as John Dalton had suggested but a jigsaw puzzle made of smaller pieces.

Thomson's notion of the electron came from his work with a nineteenth century scientific curiosity: the cathode ray tube. For years scientists had known that if an electric current was passed through a vacuum tube, a stream of glowing material could be seen; however, no one could explain why. Thomson found that the mysterious glowing stream would bend toward a positively charged electric plate. Thomson theorized, and was later proven correct, that the stream was in fact made up of small particles, pieces of atoms that carried a negative charge. These particles were later named electrons.

After Eugen Goldstein's 1886 discovery that atoms had positive charges, Thomson imagined that atoms looked like pieces of raisin bread, a structure in which clumps of small, negatively charged electrons (the "raisins") were scattered inside a smear of positive charges. In 1908, Ernest Rutherford, a former student of Thomson's, proved Thomson's raisin bread structure incorrect.

Cathode Ray
Summary:
J.J. Thomson was an English scientist.  He discovered the electron when he was experimenting with gas discharge tubes.  He noticed a movement in a tube.He called the movement cathode rays.The rays moved from the negative end of the tube to the positive end.He realized that the rays were made of negatively charged particles – electrons.