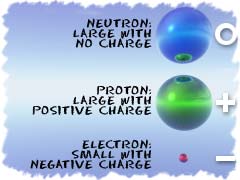 Description of this model:
The quantum mechanical model is based on quantum theory, which says matter also has properties associated with waves. According to quantum theory, it’s impossible to know the exact position and momentum of an electron at the same time. This is known as the Uncertainty Principle.

The quantum mechanical model of the atom uses complex shapes of orbitals (sometimes called electron clouds), volumes of space in which there is likely to be an electron. So, this model is based on probability rather than certainty. 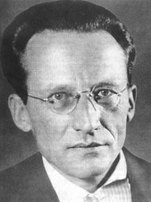 Quick summary:  Schrodinger discovered that electrons don't move in orbits (or in a set path at all).  He theorizes electrons move in waves, and they have no exact location.

Description:
In 1926 Erwin Schrödinger, an Austrian physicist, took the Bohr atom model one step further. Schrödinger used mathematical  equations to describe the  likelihood of finding an electron in a certain position. This atomic model is  known as the quantum mechanical model of the atom. Unlike the Bohr model, the quantum mechanical model does not define the exact path of an electron,  but rather, predicts the odds of the location of the electron. This model  can be  portrayed as a nucleus surrounded by an electron cloud. Where the cloud  is most  dense, the probability of finding the electron is greatest, and  conversely, the  electron is less likely to be in a less dense area of the cloud. Thus,  this model introduced the concept of sub-energy levels.

This helps to summarize Schrodinger's theory in kid-friendly terms:
http://www.colorado.edu/physics/2000/quantumzone/schroedinger.html 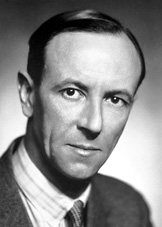 Quick Summary:  James Chadwick's Atomic Theory led to the discovery of neutrons. In it, he bombarded a sheet of beryllium with high energy of particles. Other particles came loose, namely the neutron of the atom.

Description:
In 1932, James Chadwick discovered the neutron. In 1935 he won the Noble Peace Prize. Before he discovered this, people thought the atom was made up of only protons and electrons. The protons were large and bundled together in the nucleus, and the electrons went around the nucleus in a circle. The neutron was very hard to find because it did not repel the protons when it was in the atom.

In 1932, James Chadwick bombarded beryllium atoms with alpha particles. An unknown radiation was produced. Chadwick interpreted this radiation as being composed of particles with a neutral electrical charge and the approximate mass of a proton. This particle became known as the neutron. With the discovery of the neutron, an adequate model of the atom became available to chemists.

Since 1932, through continued experimentation, many additional particles have been discovered in the atom. Also, new elements have been created by bombarding existing nuclei with various subatomic particles. The atomic theory has been further enhanced by the concept that protons and neutrons are made of even smaller units called quarks. The quarks themselves are in turn made of vibrating strings of energy. The theory of the composition of the atom continues to be an ongoing and exciting adventure.
STRUCTURE OF ATOM

Atoms are the basis of chemistry. They are the basis for everything in the Universe. You should start by remembering that matter is composed of atoms. Atoms and the study of atoms are a world unto themselves.

Atoms are the basic units of matter and the defining structure of elements. Atoms are made up of three particles: protons, neutrons and electrons.
That's all you have to remember. Three things! As you know, there are almost 120 known elements in the periodic table. Chemists and physicists haven't stopped there. They are trying to make new ones in labs every day. The thing that makes each of those elements different is the number of electrons, protons, and neutrons. The protons and neutrons are always in the center of the atom. Scientists call the center region of the atom the nucleus. The nucleus in a cell is a thing. The nucleus in an atom is a place where you find protons and neutrons. The electrons are always found whizzing around the center in areas called shells or orbitals.

Protons and neutrons are heavier than electrons and reside in the center of the atom, which is called the nucleus. Electrons are extremely lightweight and exist in a cloud orbiting the nucleus. The electron cloud has a radius 10,000 times greater than the nucleus.

A key discovery leading to the current model of the atom was that atoms contain charged particles. You can also see that each piece has either a "+", "-", or a "0." That symbol refers to the charge of the particle. Have you ever heard about getting a shock from a socket, static electricity, or lightning? Those are all different types of electric charges. Those charges are also found in tiny particles of matter. The electron always has a "-", or negative, charge. The proton always has a "+", or positive, charge. If the charge of an entire atom is "0", or neutral, there are equal numbers of positive and negative pieces. Neutral means there are equal numbers of electrons and protons. The third particle is the neutron. It has a neutral charge, also known as a charge of zero. All atoms have equal numbers of protons and electrons so that they are neutral. If there are more positive protons or negative electrons in an atom, you have a special atom called an ion.

All matter consists of particles called atoms. This is a list of the basic characteristics of atoms: 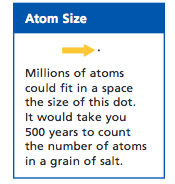 Atoms are extremely small, about 10–10 meters in diameter. This means that you could fit millions of atoms in the period at the end of this sentence. In an atom the electron cloud is about 10,000 times the diameter of the nucleus.

Electrons are much smaller than protons or neutrons—about 2000 times smaller. Electrons also move about the nucleus very quickly. Scientists have found that it is not possible to determine their exact positions with any certainty. This is why we picture the electrons as being in a cloud around the nucleus.

Atomic Numbers
If all atoms are composed of the same particles, how can there be more than 100 different elements? The identity of an atom is determined by the number of protons in its nucleus, called the Every hydrogen atom—atomic number 1—has exactly one proton in its nucleus. Every gold atom has 79 protons, which means the atomic number of gold is 79.